Bindura girls learn football and life skills from the pros 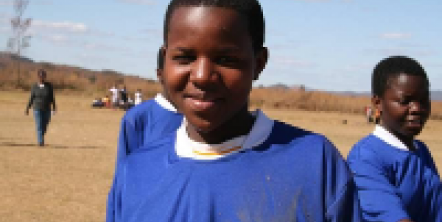 Members of the Footballers Union of Zimbabwe (FUZ) spent time with girls soccer teams from 10 schools in Mashonaland Central province on July 9 2011, sharing football and life skills lessons with the young female footballers. The U.S. Embassy-sponsored Goals for Girls Soccer tournament – the fourth in a series - was held at S.O.S Hermann Gmeiner School in Bindura. “It was so exciting. The enthusiasm I saw from the players, their willingness to take instructions and their ability to express themselves without fearing to make mistakes overwhelmed me,” said Paul Guandani, executive secretary of FUZ. Gundani assisted the coaching staff of the overall tournament winners, HermannGmeiner High School, at the soccer tournament sponsored by the U.S. Embassy’s Public Affairs Section withfunding from the U.S. President’s Emergency Plan for AIDS Relief (PEPFAR).

The tournament enablesteachers, sports bodies and nongovernmental partners to provide information about life skills and reproductivehealth issues in a captivating competitive environment. The Embassy has supported previous Goals for Girlstournament programs in Buhera West and Harare. The event in Bindura was the fourth such event in threeyears.“He changed the performance of the team and motivated the players,” said Ms. Tapfuma Pedzisai, female coach of Dindinyonge Secondary School after Gunners F.C. striker More Moyo’s intervention resulted in the team accumulating seven points in their last three matches. Despite both players and coach having a football lesson from the premier league striker, it was not enough to take her team to the finals. “I identified two of their best players - one is a midfielder and the other a striker - and I molded the team around them. It worked wonders,” said an excited Moyo (in picture with girls team), who is also treasurer at FUZ.

Other participating schools were Chipadze, Kayerera, Mupandira, Murembe, Rutope, Nyava, Masembura and Chipindura. In addition to playing soccer, each school team participated in a 10 minute edutainment program run by the Zimbabwe AIDS Network, the Zimbabwe National Family Planning Association (ZNFPA) and the Sports and Recreation Commission. The female students hailed the sports and education program and spoke confidently about issues of HIV and AIDS. The tournament’s top goal scorer, Mavis Chirandu (in picture), said she had lost count of the number of goals she scored but cautioned about the dangers of peer pressure. “I learned that peer pressure can be misleading. I should always seek guidance from my teacher or parent if I feel something is not right,” said the 16 year old orphan from Hermann Gmeinner School. Mavis scored all four goals in the final match as her team beat Murembe 4-1 to win the tournament. “Knowledge is power. Use what you learn and achieve your dreams,” said Andrew Posner, Assistant Public Affairs Officer at the U.S. Embassy in Harare. Posner praised the organizers of the tournament and said the event enhanced partnerships between the U.S. and Zimbabwe.

The U.S. Embassy recently launched a major HIV/AIDS awareness and prevention initiative with FUZ to educate its members in the various soccer leagues throughout the country and then have them become spokesmen and role models for youth in the fight against the disease. The participating schools received two soccer balls each, a set of bibs and 20 cones. Mr. Mashangana, chairperson of the National Association of Secondary School Headmasters, confirmed that the most talented players in the tournament will have an opportunity to participate in the 2011 Youth Games in Gwanda.

Bindura girls learn football and life skills from the pros

Members of the Footballers Union of Zimbabwe (FUZ) spent ..

The Footballers Union of Zimbabwe in partnership with PEPFAR

The Footballers Union of Zimbabwe in partnership with PEP..